The Altoona area was originally inhabited by Native Americans of the Iroquois Confederacy. The first western settlers arrived in the mid- 1700s. A series of stockades were constructed in the region as a defense against Indian raids, including Fort Roberdeau.

In 1811, iron making began at the Allegheny Furnace. The owner of the furnace built the Baker Mansion  nearby (pictured below).

By 1831, the Main Line of the Pennsylvania Canal was extended west to Hollidaysburg. The Canal connected to the Allegheny Portage Railroad in 1834, which hoisted boats over the Allegheny Ridge on primitive rail cars.

Altoona owes its origin and growth to the Pennsylvania Railroad. While most cities were located along rivers, Altoona was located at the approach to the Horseshoe Curve.

The Pennsylvania Railroad was chartered by Pennsylvania in 1846. In 1849, the Railroad began developing the community that became Altoona - as a staging area for the construction of the rail line. By 1850, the railroad had been constructed from Harrisburg west to Altoona. The Allegheny Ridge was a major barrier to the completion of an east-west railroad across Pennsylvania. Through innovative engineering, the Horseshoe Curve was completed in 1854 west of Altoona to provide a westward passage at a grade that was gradual enough for heavy trains. The Horseshoe Curve is now designated a National Historic Landmark. Once this route was completed, the railroad was able to replace the canal as the primary means of transportation. By 1858, the travel time between Philadelphia and Pittsburgh had been reduced to 15 hours, as opposed to the three days required before the railroad was built.

The original rail yard in Altoona was centered in the vicinity of the present-day Station Mall between 9th and 10th Avenues. The west side of this rail yard became the commercial center, while the east side was primarily residential. The most prominent building was the Logan House, on the site of the present Post Office. Altoona was incorporated as a borough in 1854, when it included approximately 2,000 residents. the population grew to over 10,000 by 1870 - partly as a result of demand for rail cars during the Civil War. Altoona was incorporated as a city in 1868.

By 1880, Altoona's population had reached almost 20,000. This growth in residents was accompanied by establishment of strong churches, clubs and a range of businesses. Downtown Altoona for decades served as the commercial center for the entire surrounding region. Llyswen was a carefully planned suburban community that was laid out between 1894 and 1907 to take advantage of streetcar access. 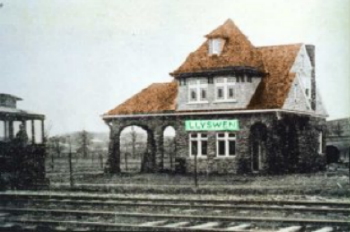 By 1925, 14,000 of the 17,000 industrial workers in the area were employees of the Pennsylvania Railroad. The rail yards produced locomotives, other rail cars and railroad equipment. At one point, the present-day location of the Station Mall included three roundhouses and the main locomotive construction facilities. Other major industries included silk, meat-packing and clothing.

Altoona grew through new construction and annexations that almost doubled the size of the city, including the annexation of the Borough of Juniata. The development of the City was spurred by horse-drawn trolleys in the 1880s and electrified trolleys in the 1890s. These trolleys allowed residents to live further from their workplaces. Commercial development occurred along many of these trolley routes, which extended along most of major streets of present-day Altoona.

The early 1900s saw tremendous growth, from a 1900 population of almost 39,000 to an all-time peak of 82,000 residents in 1930. After World War II, the demand shifted from steam locomotives to more cost-efficient and reliable diesel and electric locomotives. As a result, the construction of new locomotives ended in Altoona, although the repair and maintenance of locomotives continues to employ a large number of people in Altoona. This employment has continued through changes from the Pennsylvania Railroad to Penn Central to Conrail and to present-day owner Norfolk Southern.

After World War II the era of railroad ended. All business and commerce up to this time was conducted between cities and those cities were connected with railroads as the main transporter of goods. As the nation developed the interstate highway system, the corridors of commerce moved away from the cities and their rail connections. Just like the rest of the nation, the retail activity increased and relocated to the newly developing shopping districts located along the nearby highway corridors outside the City limits. The 1990s saw Altoona finally getting it's link to the interstate highway system.

Additional information on local history can be accessed at the following sites: