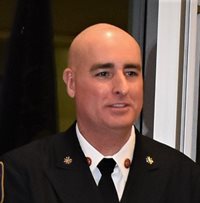 Altoona, PA – City Manager, Omar Strohm, has announced the promotion of Adam Free to the position of Fire Chief.  Chief Free has been serving as Interim Chief since September, upon the retirement of Tim Hileman.

Since first joining the Altoona Fire Department in March of 2005 (17 ½ years ago), Free has served in the positions of Firefighter, Engineer, Captain and Deputy Chief. Before his promotion to Deputy Chief, Free served as the City’s Fire Inspector for three years.  During that time Free, and other members of the Fire Department, boosted inspections from 260 in 2017 to 686 in 2021.

According to City Manager Omar Strohm, “I am pleased to promote Adam and feel his experience will be an asset to the Department as well as to the residents of the City.”  Chief Free’s promotion was effective on November 1, 2022.

Back to previous page